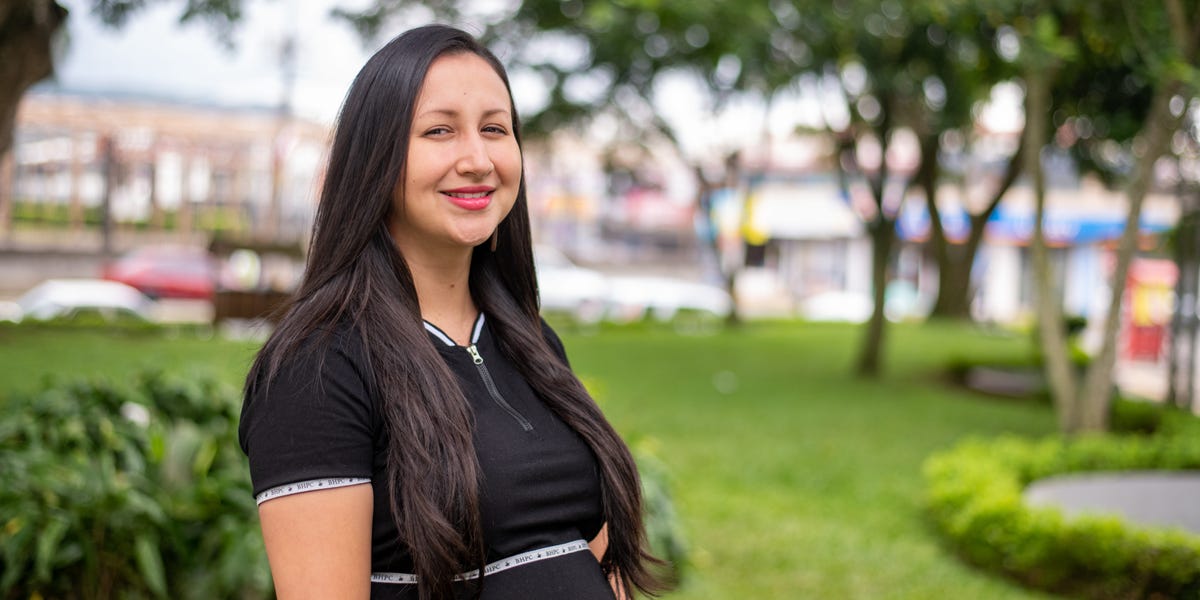 Thanks for signing up!

Access your favorite topics in a personalized feed while you’re on the go.

Ligia Morera, 32, lives in San Ramón de Alajuela in the Central Valley of Costa Rica with her husband, Rodrigo Santamaria, 35. She studied tourism at university before working in hotels and travel agencies. Six years ago, she and her husband founded their own travel-planning business.

When COVID-19 put international travel on pause — and thus dried up their main source of income — they cast around for other employment, including browsing the freelance marketplace Upwork. That’s where they stumbled on the chance to become pioneers in the travel space: virtual-reality tour guides.

Since November of last year, the couple have been operating as virtual guides via the platform provided by Dokodemo Door Trip, a subsidiary of the Japanese company Metareal Corporation. Santamaria serves as videographer and editor, while Morera focuses on guiding.

Their first tour, all shot on Santamaria’s GoPro Max 360, features a rare natural phenomenon: turtle nesting on Ostional beach in the Nicoya Peninsula. Hundreds, often thousands, of turtles come up by moonlight from the ocean along a 1-mile stretch of beach and then proceed to dig into the black sand and carefully lay a haul of eggs.

“We prerecorded the turtle nesting together. The biggest one is in October, so we did that in 2021,” Morera told Insider. “I play the video, with all the natural sounds as we walk along the beach, and I started telling them about how the turtles lay their eggs.” Her guests pay $12 each for a 30-minute tour through this immersive video.

Morera sees potential in the niche for many reasons, beyond attracting people cautious to leave their homes in the wake of COVID-19. Many travelers are reassessing trips amid a growing awareness of travel’s environmental impact and are looking for more sustainable options. And for businesses, virtual tour guiding may provide an easy new revenue stream that could also add stability in the event of another pandemic or wave of lockdowns.

Though Dokodemo’s platform is available worldwide, Japan has been Morera’s main source of clientele so far, she said, thanks mostly to the company’s location. Morera is fluent in English and Spanish but doesn’t speak a word of Japanese — and that’s where Dokodemo can help.

Dokodemo’s parent company is a barely two-year-old artificial-intelligence-based translation firm. “It’s designed to break down the so-called language barrier between Japanese businesses and the rest of the world with an AI translation in real time,” Stephen Black, the company’s guide-support manager — who helps creators ready their videos for use — told Insider. “That AI translation and interaction like that between guides and guests is a big point of what sells the idea.” In other words, these VR tours are as much a marketing program for its core business as a standalone revenue stream.

Black said the firm spent six months or so developing the VR tourism platform and then opened it up for nine months to contributors like Morera. At consumer launch, he said, it had 500 or so individual tours, and it’s now close to 1,000. “We paid the guides to create the content, so we own it and can utilize it outside the platform,” he added — think the Singapore Tourism Board paying for the right to deploy it in marketing efforts.

Popular tours, he said, are often the most colorful, like a visit to the Holi festival in India, or offer the chance to see well-known locations — Santorini, for instance, has sold well. He added that engagement tended to fall off in tours longer than 30 minutes.

Any aspiring metaverse travelers who don’t own a headset can register and receive a Meta Quest free for a week before choosing whether to buy one from Black’s firm. On average, he said, one in five customers opts for this, with Japanese users paying 37,000 yen, or about $271, to rent the hardware. Half the company’s active monthly users reside in the country, while most of the rest are elsewhere in Asia. “We’re among the biggest sellers of Meta Quest in Japan,” he said.

A new way to tour guide

Morera has embraced the new medium with gusto. She and her husband have shot and uploaded eight videos from Costa Rica — one is a hummingbird tour, as requested by previous participants — as well as eight in neighboring Panama, where she has family. She’s particularly proud of the shoot they planned with the Guna Yala indigenous people, who were marking a festival in Panama. “It’s important for your culture to show that,” she said, “and now something that happens once a year is available year-round virtually.”

She’s also aggressively marketing to audiences beyond Japan via social media and other avenues, like local universities in her country — she just led 30 students around the turtle-hatching event thanks to a directive from their biology professor at the University of Costa Rica. Another source of referrals is other VR tour guides. “There’s a community now,” she said, “and we support each other, showing how to promote — we can connect as individuals from different countries and background and give each other tips, like a Japanese girl who lived in Belize who helped me out.”

Morera fixes her group sizes at two to 10 people — any bigger, she said, makes it harder for participants to engage and ask questions effectively.

The biggest issue, she added, is the reliability of broadband locally. “In Costa Rica, sometimes we get little problems with that,” she said. Scheduling also presented its challenges. She usually plans for tours to happen on Friday or Saturday nights, Japan time, once every two weeks, as these have proved the most popular periods for bookings.

“Many of my guests sign up saying they’re enjoying their beer in the evening, and they’re in a mood for relaxation,” she said. “It’s better to be learning something than just scrolling through social media. That way they’re not only relaxing but learning from other humans around the world.” Review Extra: A Diver’s Guide To The World

What’s On travel guides: Bucket list things to do in Zanzibar