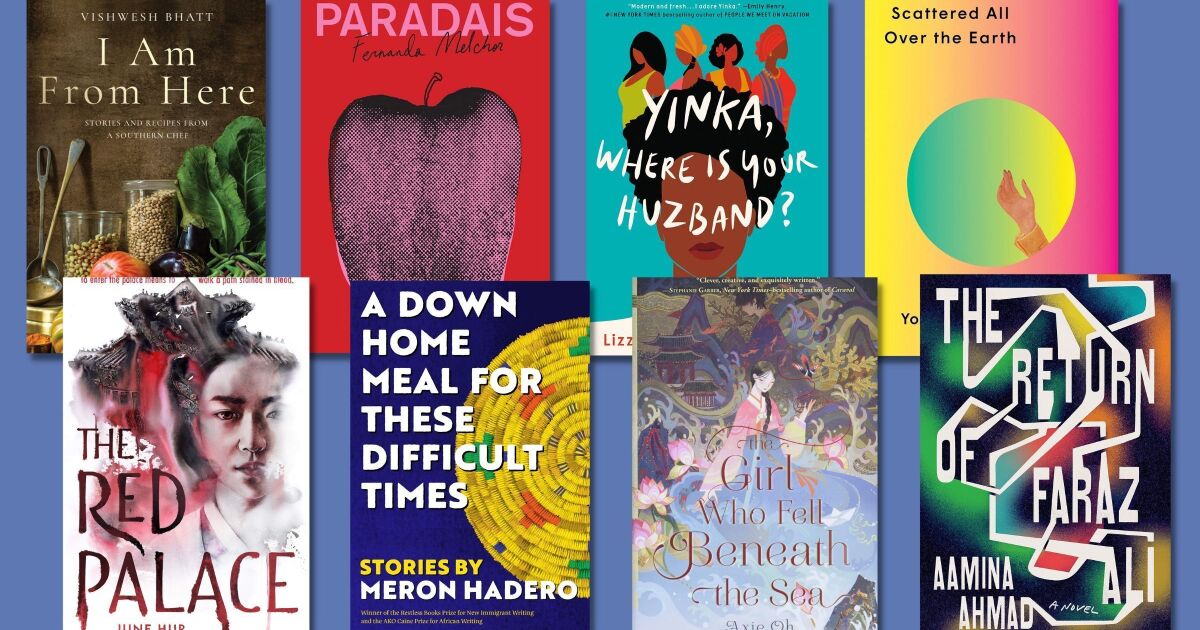 After two years of being stuck at home during the pandemic, people are ready to get out into the world. You can grin and bear the high price of getting on an airplane these days — or transport yourself through the pages of a good book.

And for that, we have a whole lot of suggestions in the inaugural summer edition of NPR’s Books We Love project.

From the 167 book recommendations, we’ve selected 10 that transcend time and place: from the red-light district of Lahore, Pakistan, and streets of Mexico to the royal court of 18th century Korea and a dystopian future where Japan no longer exists.

The Return of Faraz Ali by Aamina Ahmad

It starts out as a crime novel. A murder. A cop. An investigation. Then it evolves into so much more. This assured debut novel evokes an older Pakistan, with all the many complications of class, society, entitlement, entangled history. Anyone looking for a pat ending should leave this one alone. Instead, come for the evocative writing, the subtle characters and plot — some of which veered into completely unexpected territory.

I Am From Here: Stories and Recipes From a Southern Chef by Vishwesh Bhatt

Born in Gujarat, India, Mississippi chef Vishwesh Bhatt had me from hello with his genteelly defiant title, I Am From Here. Western India and the Southern U.S. share more culinary parallels than you’d think, from rice varietals and sesame to okra, shrimp and fresh tomatoes. Here, these ingredients explode in gleeful fusion, the torrid affair of a spice cabinet and a well-stocked pantry. Juicy shrimp pop beneath a crust of black pepper and coriander; pork shoulder melts in a sweet arból-guajillo chile paste. What about sourcing ingredients? After two years of lockdown, don’t tell me you don’t know how to mail-order dal!

Yinka, Where Is Your Huzband? by Lizzie Damilola Blackburn

Yinka has done everything her Nigerian-born mother expected — except find a husband, something her mother prays for loudly at their family gatherings. But Yinka has to figure out what she wants: from her career, in love and for herself on her own terms. Set in London, the novel depicts the challenge of navigating two cultures, both of which Yinka is a part of and apart from. In her commitment to being her whole self and true to her faith and ideals, Yinka writes a prayer for herself, a rallying cry to which we can all shout, “Amen!”

A Down Home Meal for These Difficult Times by Meron Hadero

Debut books don’t get much stronger than this. Meron Hadero’s remarkable stories explore a diverse cast of people doing their best to find acceptance or at least stability — a 10-year-old Ethiopian immigrant who befriends a German man in Iowa; a pair of refugees in New York determined to learn how to cook classic American food. Hadero is deeply perceptive; her dialogue always rings true; and the regard she has for her characters is apparent. This isn’t just an excellent first book, it’s an excellent book, period.

The Red Palace by June Hur

A palace nurse becomes entangled in a murder investigation when four women are found dead and her beloved mentor is accused of being the killer. It soon becomes clear that the intrigue runs far deeper than she could have anticipated and, in solving it, she may destroy the fragile balance that holds a royal dynasty in power. The Red Palace is an expertly choreographed mystery with a touch of romance and an emotionally satisfying conclusion that beautifully binds fiction to historical fact.

One for All by Lillie Lainoff

In this gender-bent retelling of The Three Musketeers, 16-year-old Tania de Batz has a chronic illness that can incapacitate her — frustrating for someone who wants to follow in the footsteps of her former Musketeer father. After her father’s death, Tania is sent to Madame de Treville, who trains young women to be Musketeers. With Portia, Théa and Aria, Tania searches for evidence to uncover a plot to assassinate King Louis XIV — and to find the identity of her father’s murderer. But handsome Étienne Verdon becomes an obstacle, because a Mousquetaire is not supposed to fall for her target.

If you’ve never heard of Edisto Island, Emily Meggett’s cookbook is a great place to start learning. Meggett is the matriarch of the island, which is home to many Gullah Geechee people and the food they’ve made for generations. The recipes are fantastic: One of my absolute favorites is Meggett’s Stuffed Fish with Parsley Rice and Roe, which is time-consuming but so worth the effort. You’re going to want to make these dishes again and again — especially Meggett’s Deviled Crab, Fried Okra, She Crab Soup, and Red Rice. And in doing so, you’ll realize the impact that the Gullah Geechee community has had on American food history.

Fernanda Melchor’s Paradais, the follow-up to the Booker Prize-nominated Hurricane Season, is another grim and powerful indictment of the depravity encouraged by Mexico’s racist, sexist and classist societal structures. Translated by Sophie Hughes, Paradais stars a a luxury housing complex’s beleaguered gardener, who’s driven by one of its residents to follow his worst impulses. Melchor’s prose is singular, with its fair share of page-long sentences that travel from the deepest psychic corners of her characters to the broadest panoramas of Mexican life.

The Girl Who Fell Beneath the Sea by Axie Oh

In this absolutely gorgeous Korean folk tale retelling, 16-year-old Mina jumps into the sea and gives herself to the Sea God in place of the beautiful Shim Cheong. In a magical underwater land filled with spirits, demons, gods and creatures of legend (including the giant snake Imugi), the Red String of Fate binding Mina to the Sea God is severed by the handsome-but-coldhearted Lord Shin. But the Red String of Fate reappears, only this time attaching her to Lord Shin. Mina has a month to investigate the Sea God’s curse and detach herself from Lord Shin before losing her mortality forever.

Scattered All Over the Earth by Yoko Tawada

This dystopian novel is riveting, bizarre as can be, and like nothing else I’ve ever read. I’m terrified not enough people will read it. A refugee from a Japan that no longer exists, Hiruko is a teacher who travels through Europe speaking in her invented language that somehow just makes sense to everyone. The book’s told in episodes and strange little spells of romance and precise world-building, which is incredibly fun in itself. But the real pull is Hiruko, one of the most charming and memorable characters I’ve ever encountered. Forget Wordle: Hiroko has us doing word games in a dystopian world! What more could one ask for?